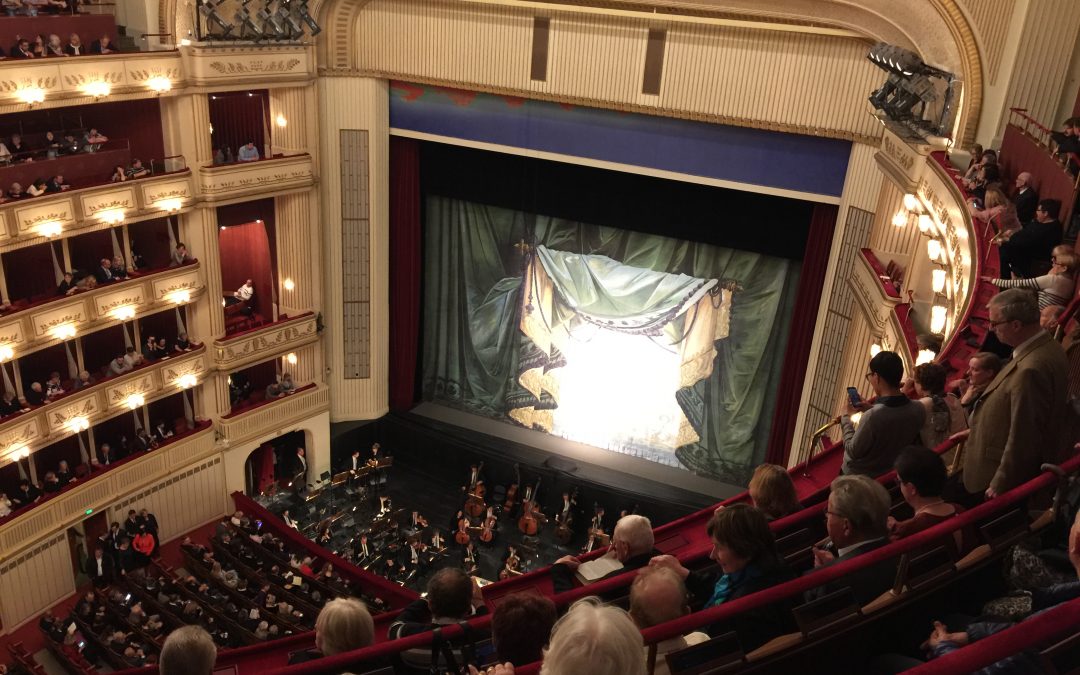 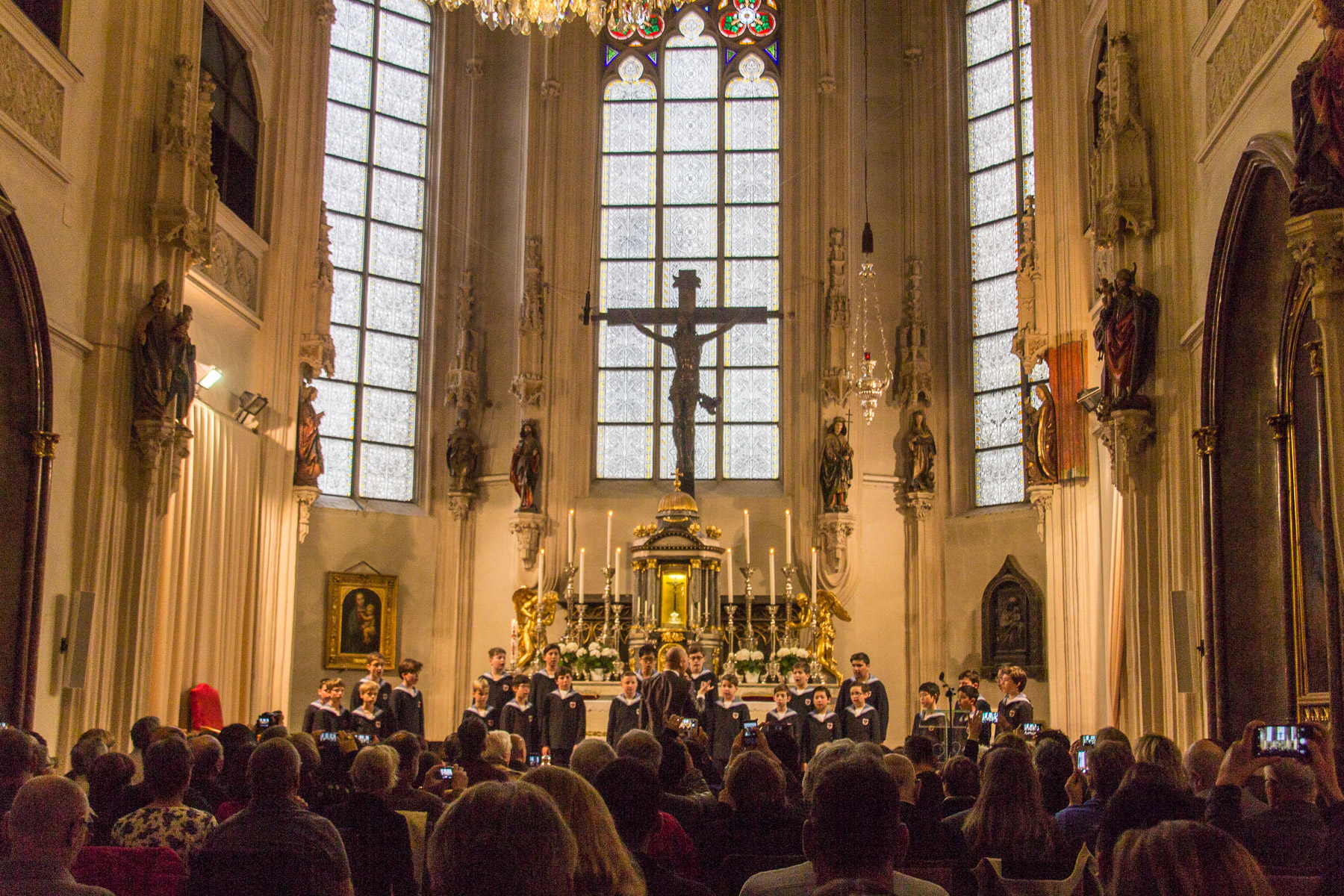 Sunday was a day we’d planned to the hilt. Two or three months ago we’d contacted a Vienna ticket agency over the Internet and purchased tickets for three different outings for this day: the Vienna Boys Choir, the Lippizaner Stallions, and the Vienna State Opera.

As we approached the Vienna docks it became obvious that we weren’t going to be docked by 8:30. At 8:40 we were standing there talking about it and George (the Viking Program Director) came up and spoke to us. We told him what was going on and he offered to call a taxi for us. We accepted and when he came back he said it would be at the dock in 5 minutes. As soon as we were docked he made us his top priority, got everything out of the way for us, and we got on that taxi in a hurry!

The taxi driver had to contend with a marathon that was being run in Vienna on Sunday morning – it wasn’t easy for him to get across town to the Hofburg. But he found a way. He delivered us right to the door, and we walked in that building at 9:13. There were three seats left – the ones we had reserved seat tickets for – and we were the last ones seated. As soon as we sat down, the service started. Whew!

A group of about a dozen men in robes walked in and began to sing a chant in unison. It wasn’t the Vienna Boys Choir, but they were good. The mass began, and a few minutes later we heard beautiful strings playing classical music. I wondered if it was a recording, because we couldn’t see anything, but then I realized it was coming from the balcony, over our heads. And then the full choir began to sing, and it was beautiful. The sound of the singers and the orchestra – they also had a small organ – completely filled the room. It was a small, narrow chapel with a high ceiling (see photo), and the acoustics were wonderful.

I think that the full choir must have included more than just the Vienna Boys, because I heard soprano, alto, tenor, and bass.

The mass lasted for 90 minutes and during that time we heard the entire work “Mass in E flat major” by Joseph Haydn. There were quite a few instruments up there: a string quartet, two English horns, two other horns, and an organ. I loved the whole thing; both choir and orchestra were terrific.

One interesting thing was the offering – after we paid $25 apiece for seats I thought it was pretty cheeky of them to pass the money bag. It’s on a stick, and they hold it right in front of your nose. I didn’t see anyone pass on giving. Oh well – I would cheerfully have paid two more euros for my ticket, so what’s the difference?

After the service was over the younger members of the choir (sopranos and altos) came down to the front of the church and sang an a cappella song for us. At that time we were allowed to take pictures. And then we got out of there as quickly as possible – the performance of the Lippizaner Stallions was to start at 11:00 am and it was already 10:45 when the mass ended.

(story continues below the photos) 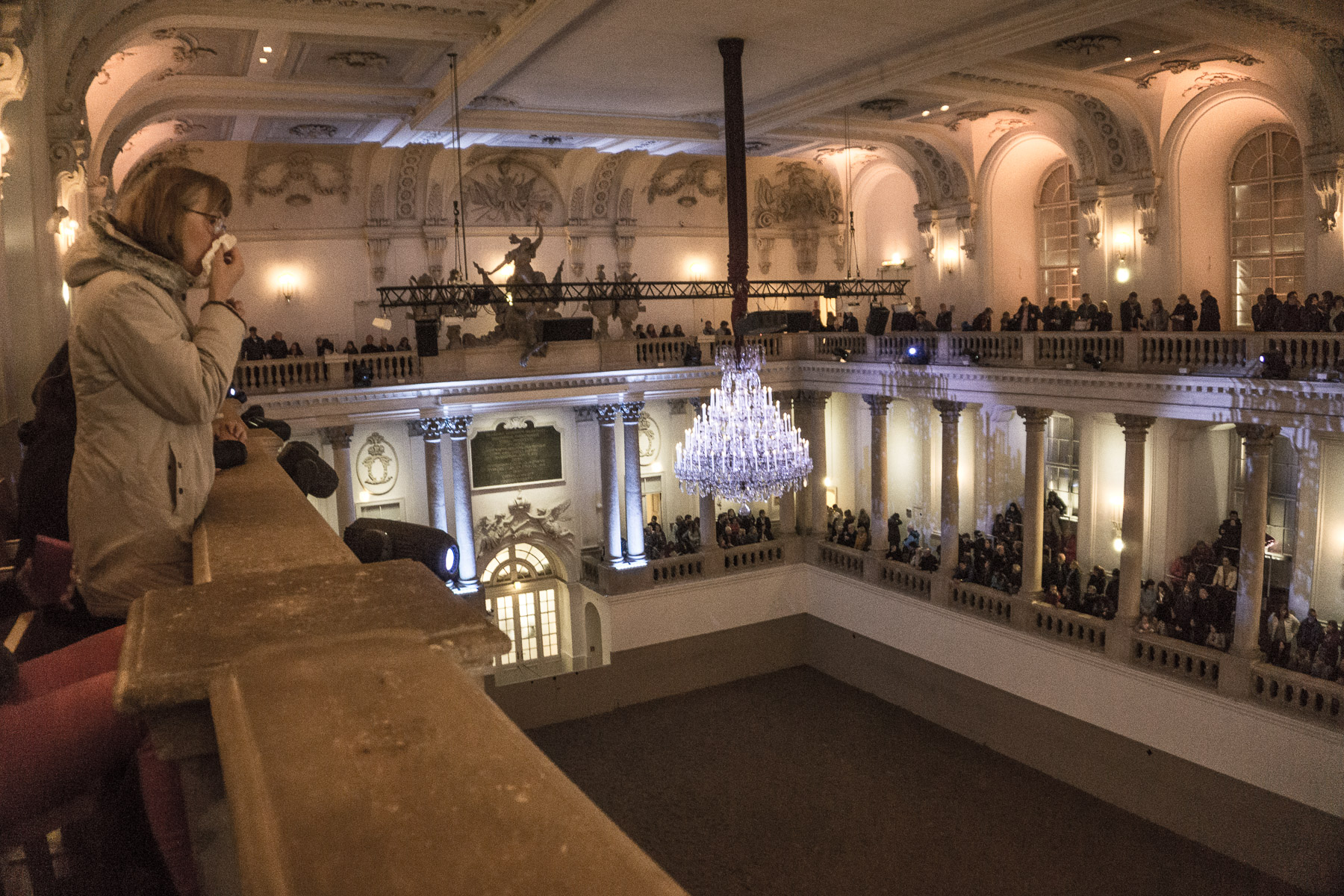 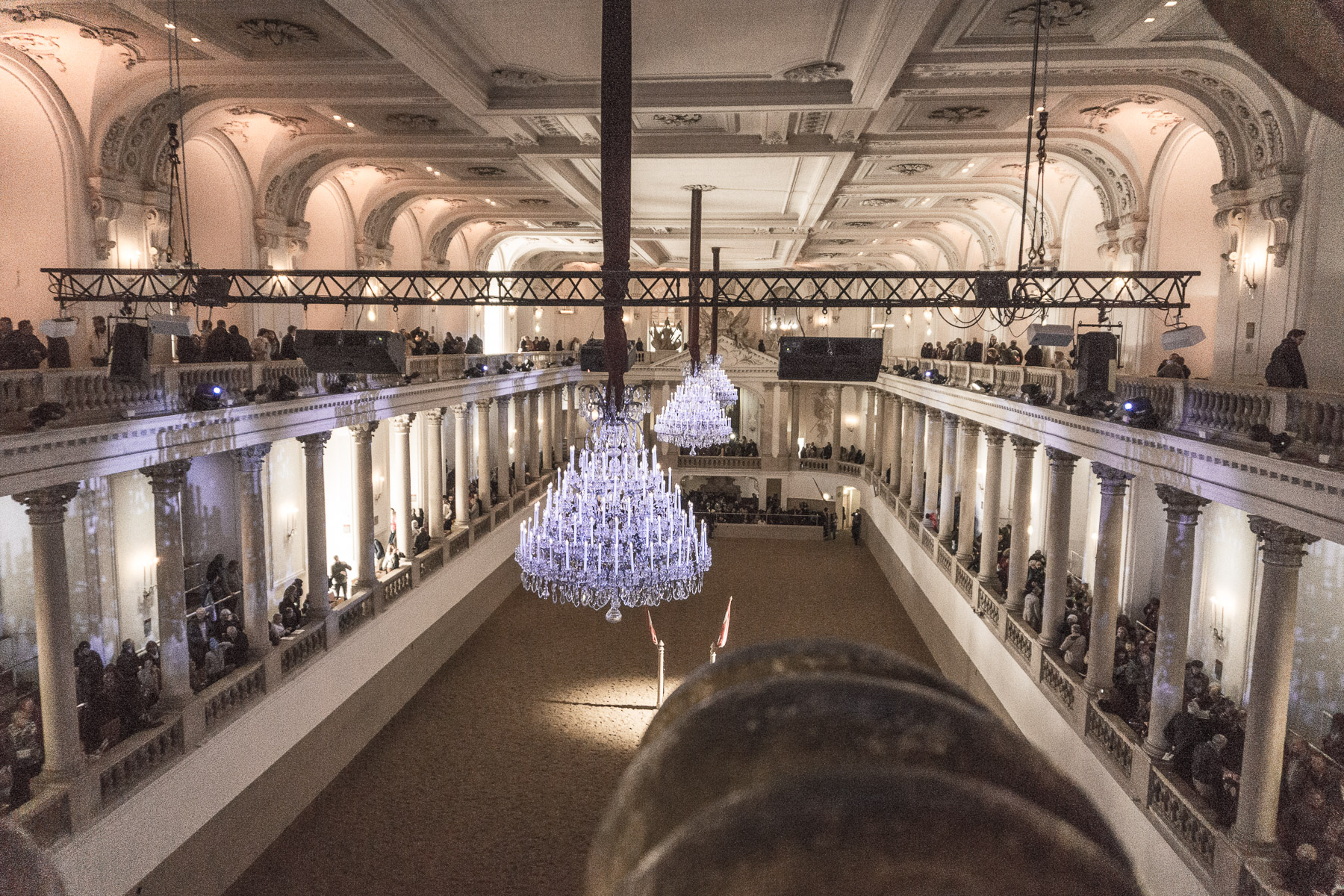 Fortunately we didn’t have far to go – the Spanish Riding School (that’s the name of the place – also in the Hofburg palace – where the Lippizaners perform) is right around the corner. We went in, got in a long line to get in to the place, and were told (after finally arriving at the front of the line) “Oh, you need to go out and around to the other side of the building and go in there.” So we hurried out, went clear around to the other side, and finally were allowed in. It made no difference at all, as far as I could tell. We all ended up in the same place. But again we were nearly the very last people seated.

The Spanish Riding School has two seating levels (upper and lower). The lower level – closer to the horses – has only one row of seats. You can also buy standing tickets to stand behind these seats. The upper level seems to have been an afterthought. There is a shelf projecting out horizontally from the wall, over the arena, which is used for sound equipment, cables, air ducts and the like. This almost completely blocks your view of the horses. To complete the blockage they’ve put up a concrete wall that comes up to eye level if you’re sitting down. So really you can’t see a thing unless you stand up and lean out over the railing. And then you can see the far half of the arena. For this we paid 50 euros a ticket.

But what we could see was pretty good. The horses were beautiful, and their movements were precise, and well-synchronized. It was impressive, if you’re into horses. Which I’m not, particularly. But Karen and Joyce were impressed. 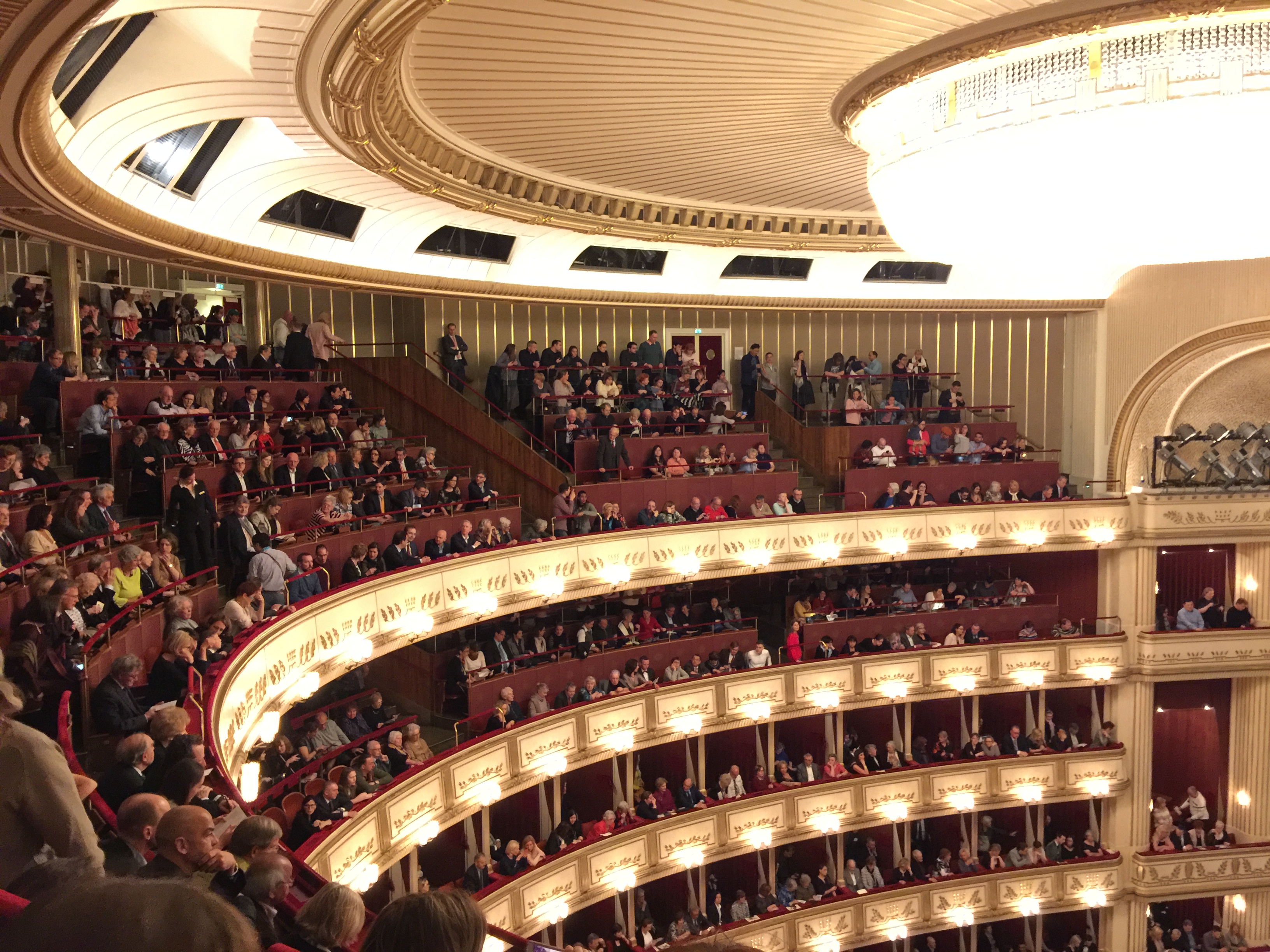 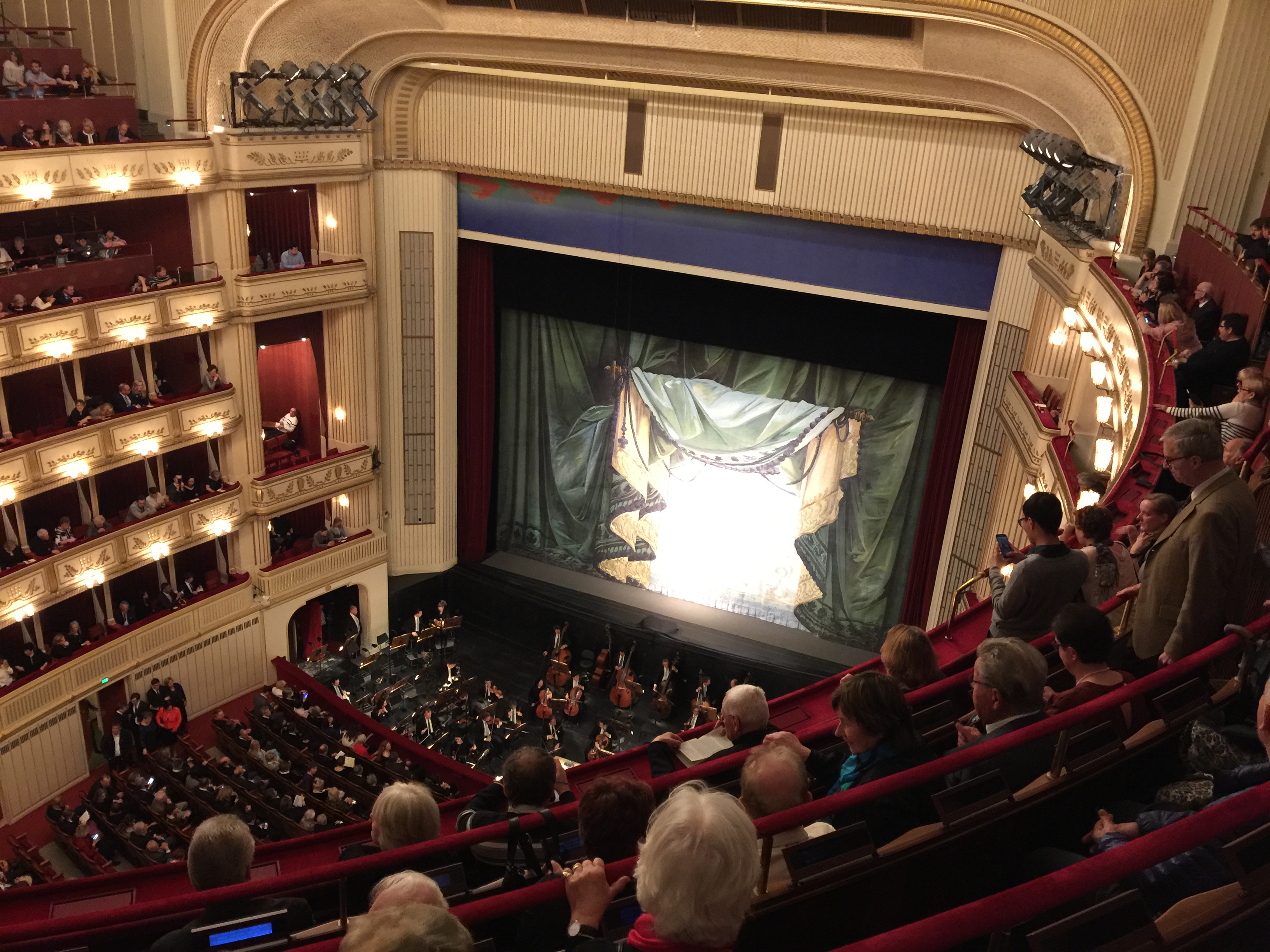 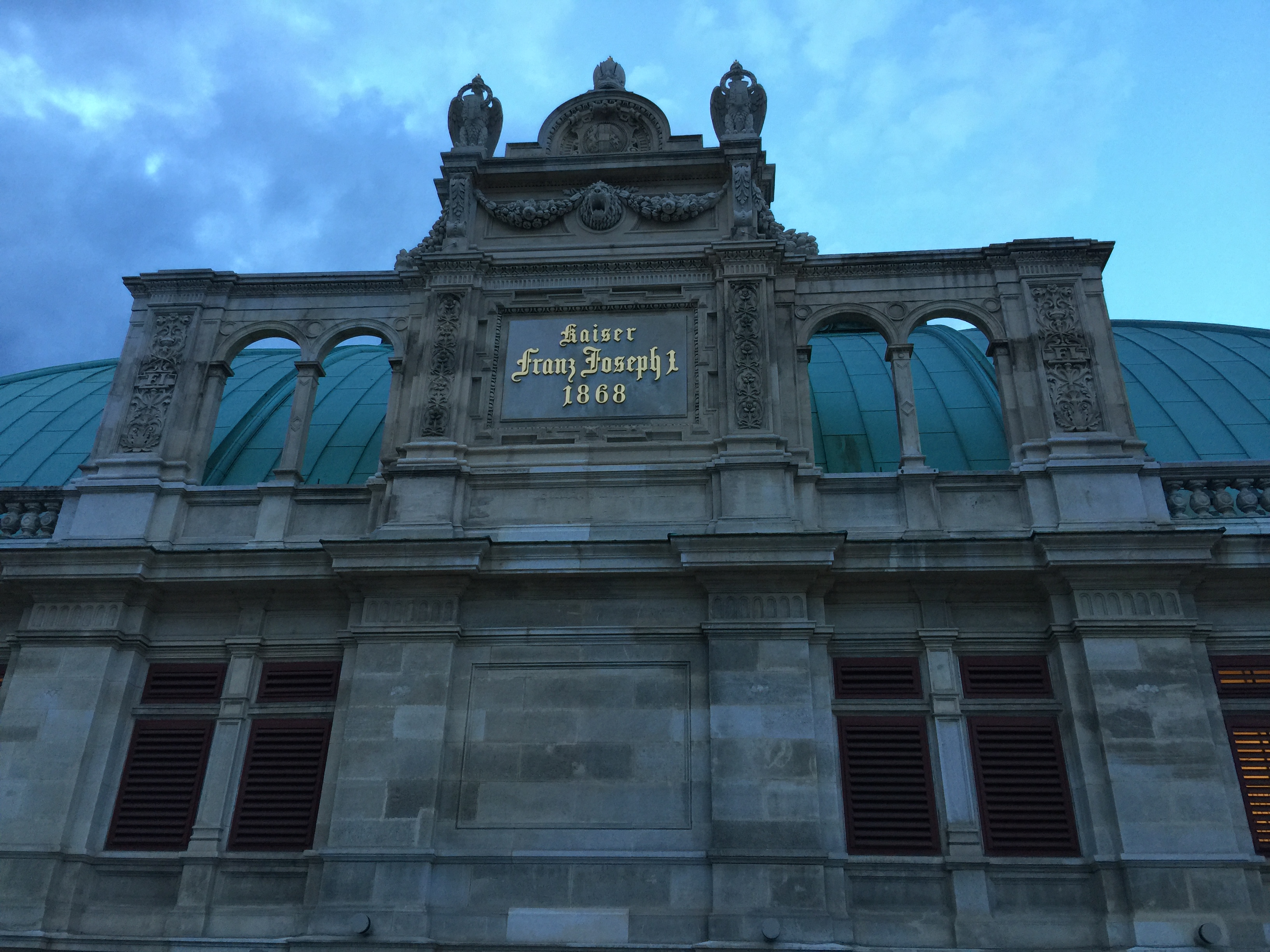 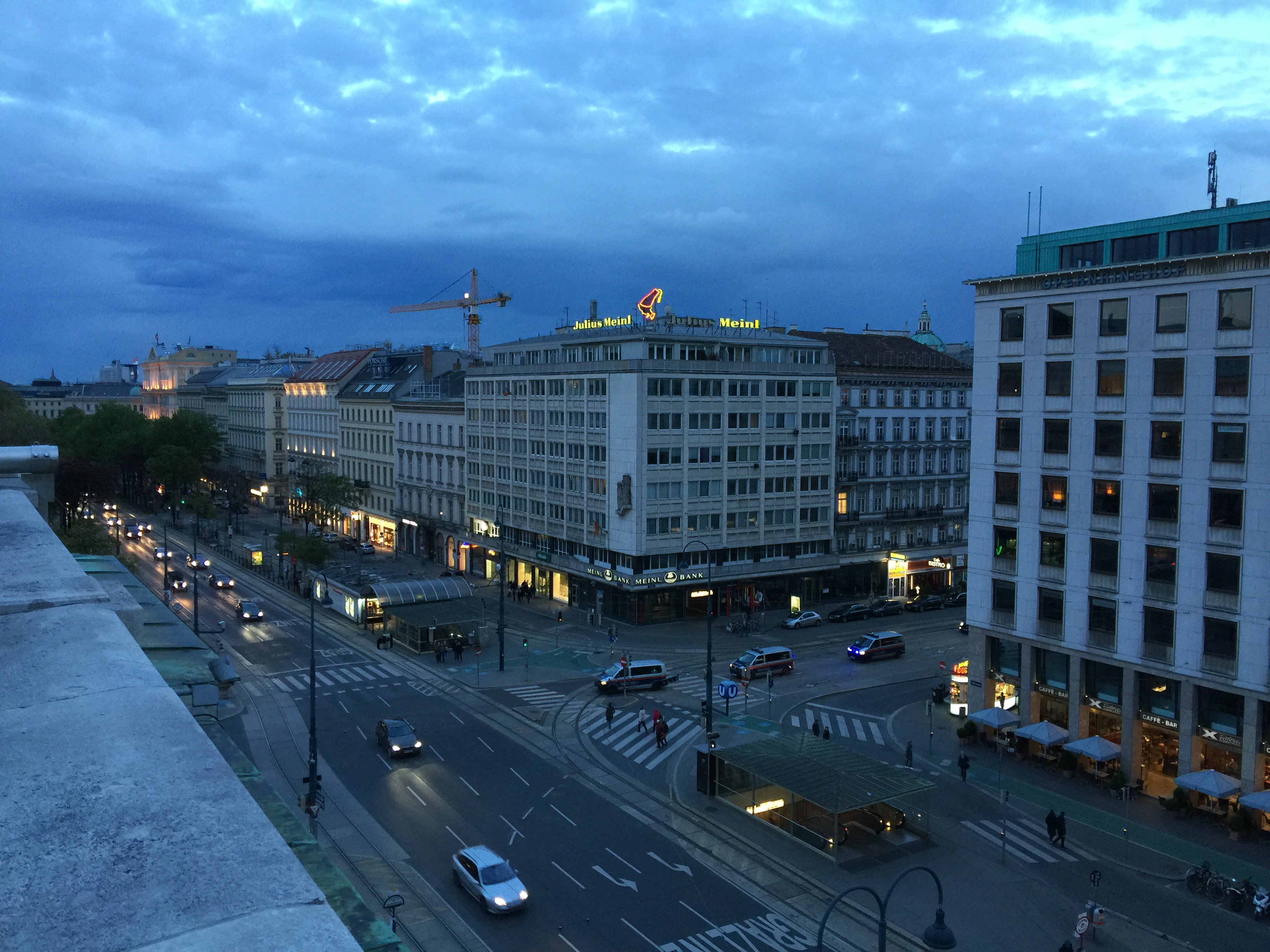 In the evening Karen and I went out again to the State Opera House. The opera was Un Ballo En Maschera by Giuseppe Verdi. Not one of his better-known operas – it doesn’t even get mentioned in his Wikipedia page. The title means “A Masquerade Ball”. It’s your typical Italian opera – forbidden love, jealousy, treachery, murder, much weeping. This one has some fortune-telling mixed in so they can foreshadow some doom.

After the first hour they brought up the lights, the actors came out for a curtain call, and the little screen in front of each seat (that had been providing a much-needed English translation during the opera) said “have a great night” and told us about the next show. And everybody got up and walked out. Karen asked “Is it over?” and I said no, it couldn’t be over – nobody’s been murdered, and we haven’t seen anything like a masquerade ball. She checked with an usher and found out that I was right. Pretty soon, everybody came back in, and they started the second act. An hour later the same thing happened. Still no murder and no ball. So we had to have a third act. Then the expected events began to occur. The guy took a long time to die, though, and the knife did no apparent damage to his musical capabilities. Eventually he finished his death throes, the opera was complete, and we applauded for a long, long time.

Actually I enjoyed it a lot. The music was fantastic, as were the orchestra and the singers. The costumes at the masquerade ball were huge and outlandish. The opera house is fantastic – be sure and look at the pictures. It’s like a six-layer cake. Every seat was full, and I didn’t see any empty seats after either intermission.

So our day was exhausting – and wonderful. What a privilege to see what we saw! I am thankful.