Our trio split up when we got to Nuremburg. Karen went on an optional Faber-Castell factory tour, to see the latest in colored pencils (which she uses in her craft work). Joyce and I went on the bus for the free Nuremburg city tour, which featured drive-by viewings of the famous Nazi sites, followed by a short tour of the castle and some free time in the town. 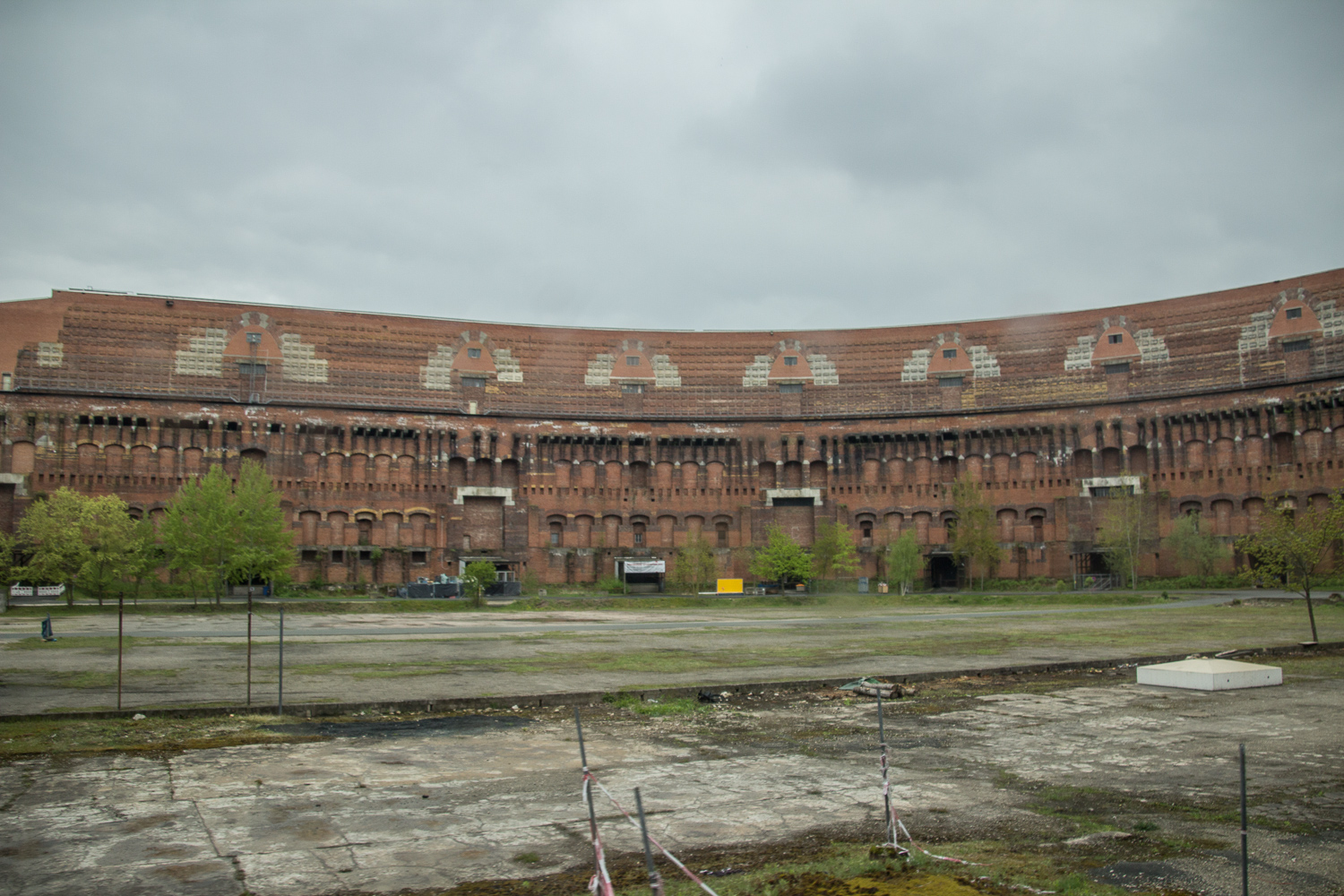 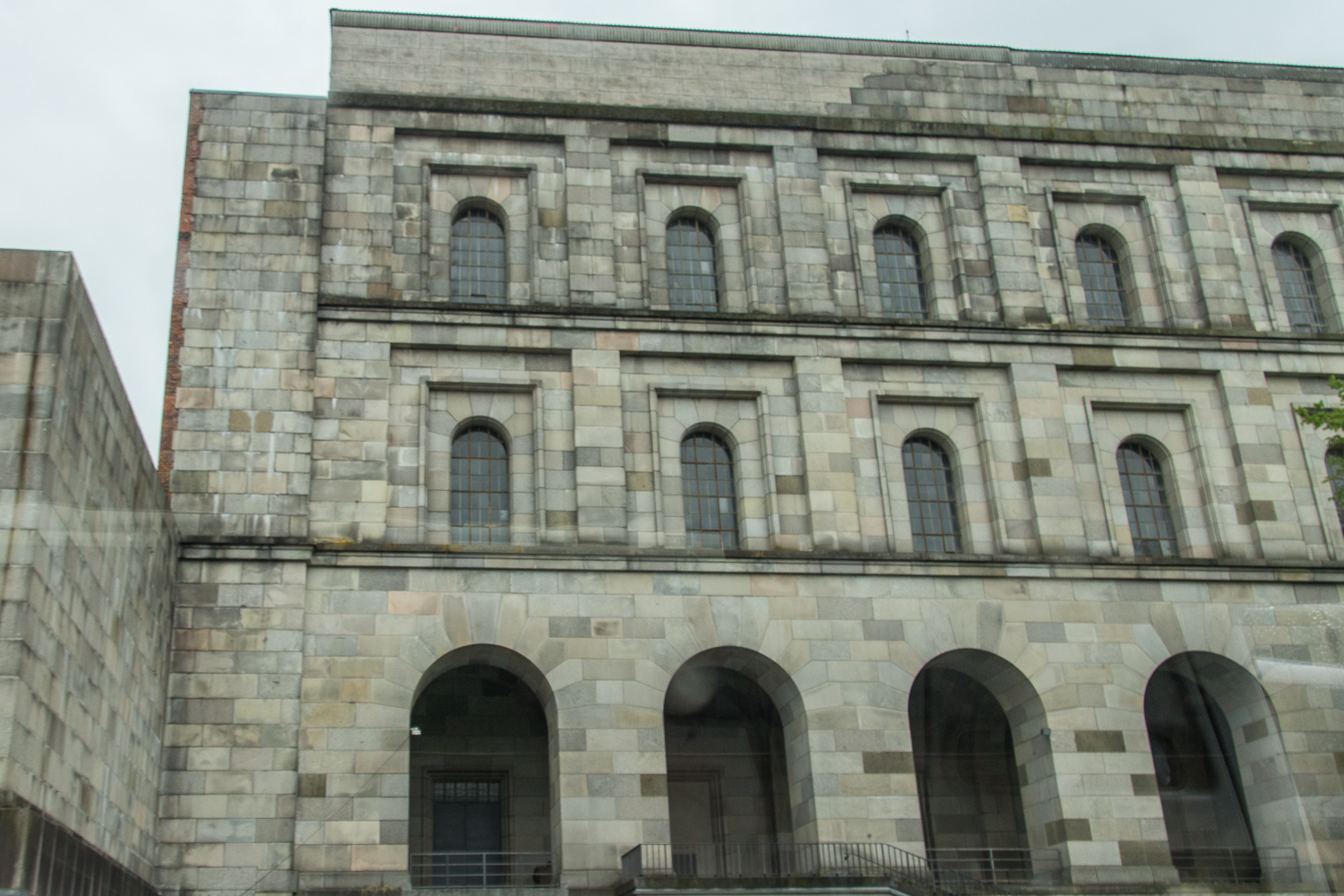 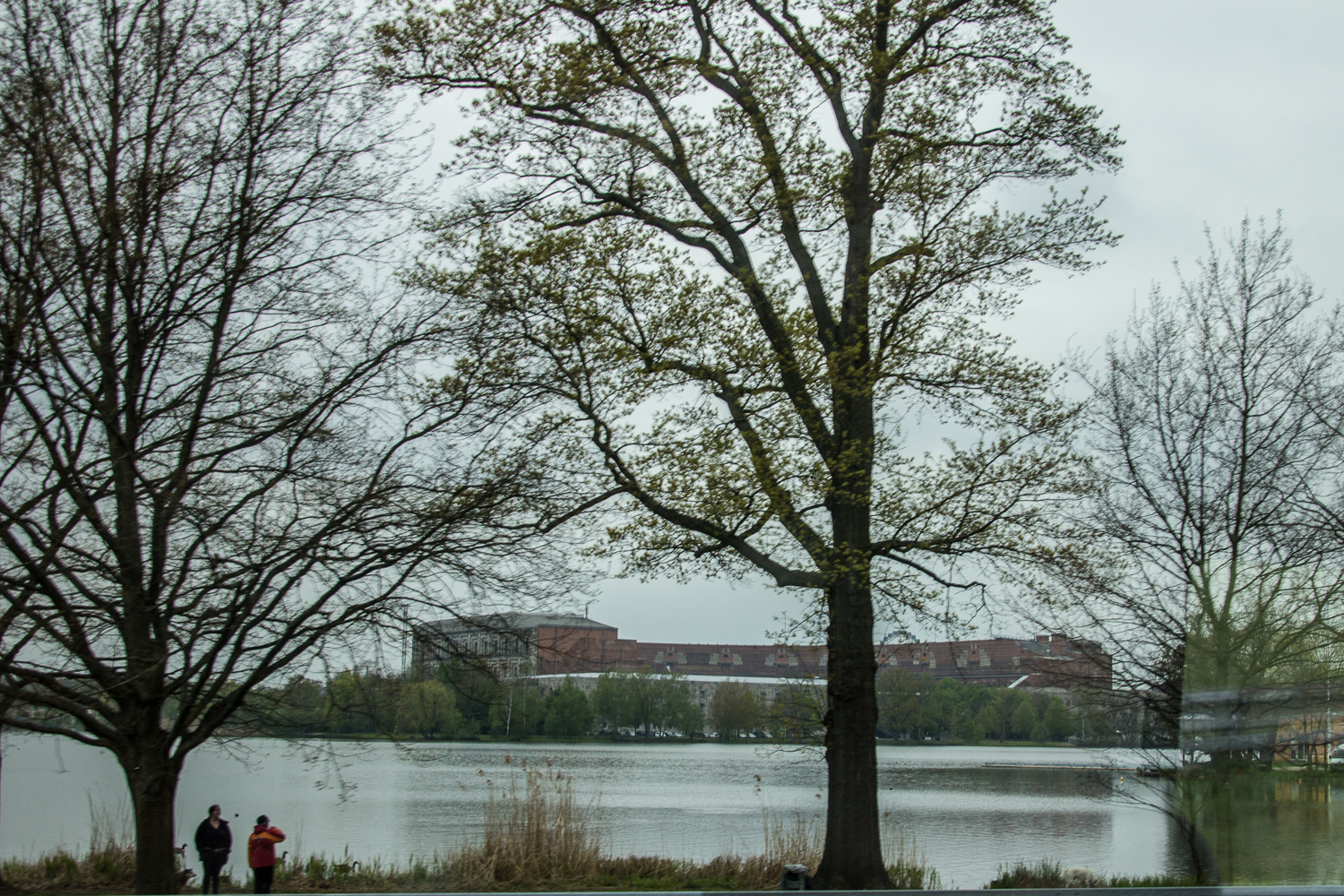 The Nazi sites were pretty interesting, especially the Congress Hall which I did not remember seeing before. It was designed to look like the Colosseum in Rome, since it was important to Hitler to have his regime identified along with great European empires from history. Intended seating capacity was 50,000. The plan was for it to have a granite-covered exterior and a marble-covered interior, but the building was never finished. The builders were recruited for the war effort, so the construction work was abandoned, and the brick walls stand exposed on the inside of the arena.

Congress Hall sits on one side of the Rally Grounds, and we did a bit of a drive-through of this famous site where Hitler rallied his troops and gave his powerful speeches. The city of Nuremburg has committed to preserving this area as a historical monument, so that new generations of students can view their country’s history. A new museum has been built on the site. We also drove by the courthouse where the famous post-war Nuremburg trials were held. It’s not remarkable physically, but quite important historically. 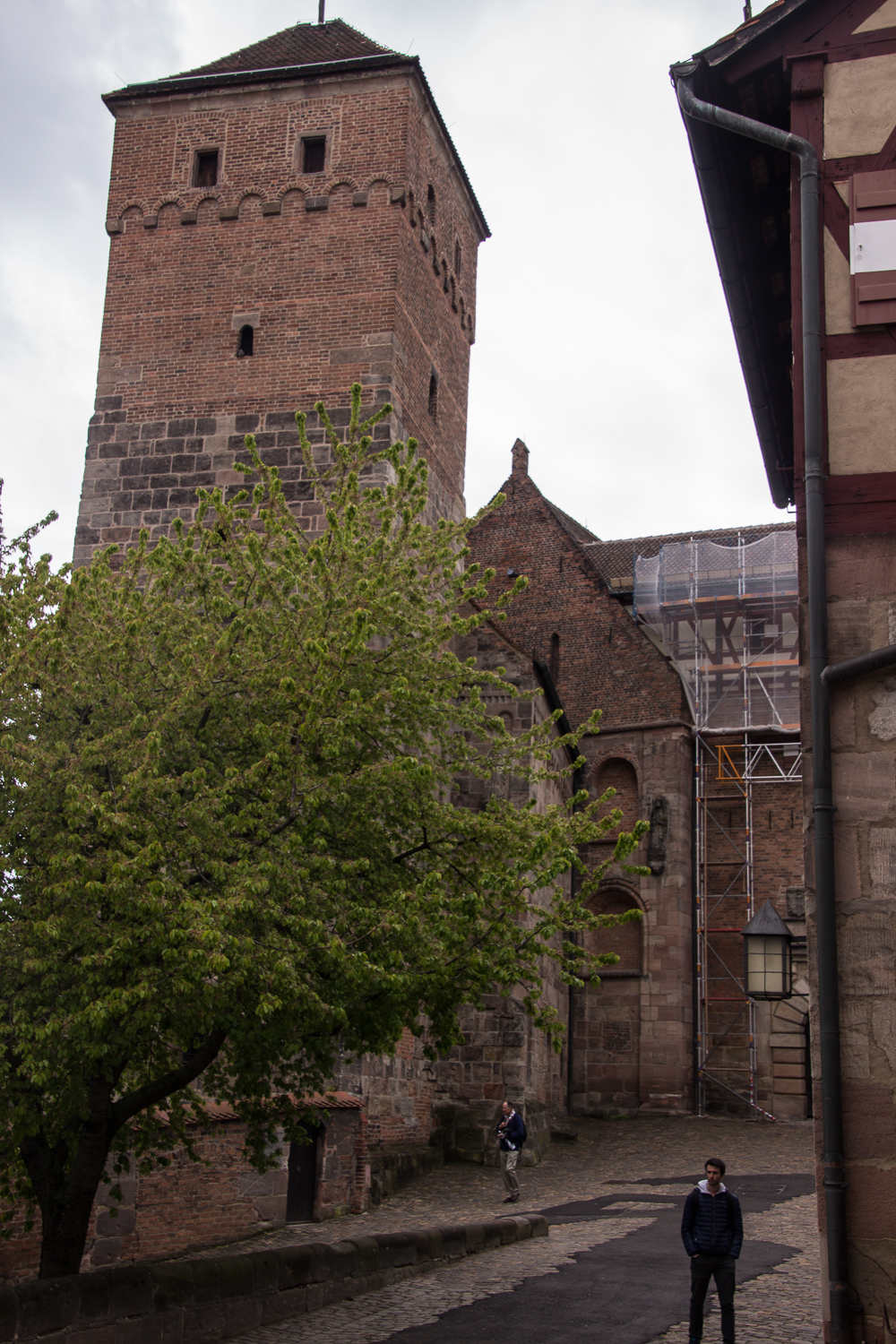 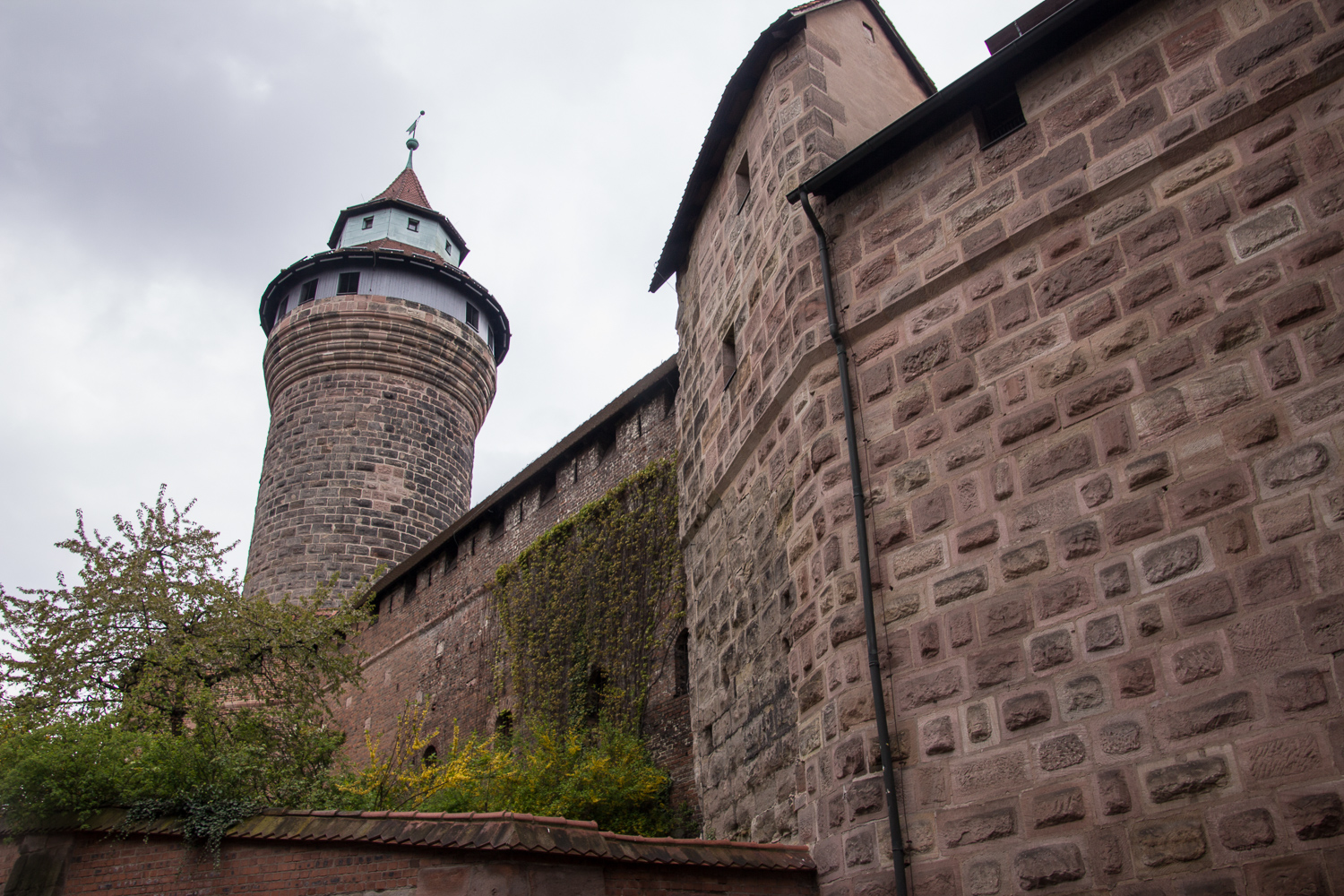 Left: The Heathens’ Tower stands next to the Imperial Chapel – both were built around 1200.

Above: Approaching fhe chapel from below we got a sense of how strong its defenses were. From this point you have to walk through a long tunnel and there are holes in the ceiling where they can pour boiling oil on you. Fortunately we escaped that fate.

Right: Look how thick the wall is, and how strong that door is. 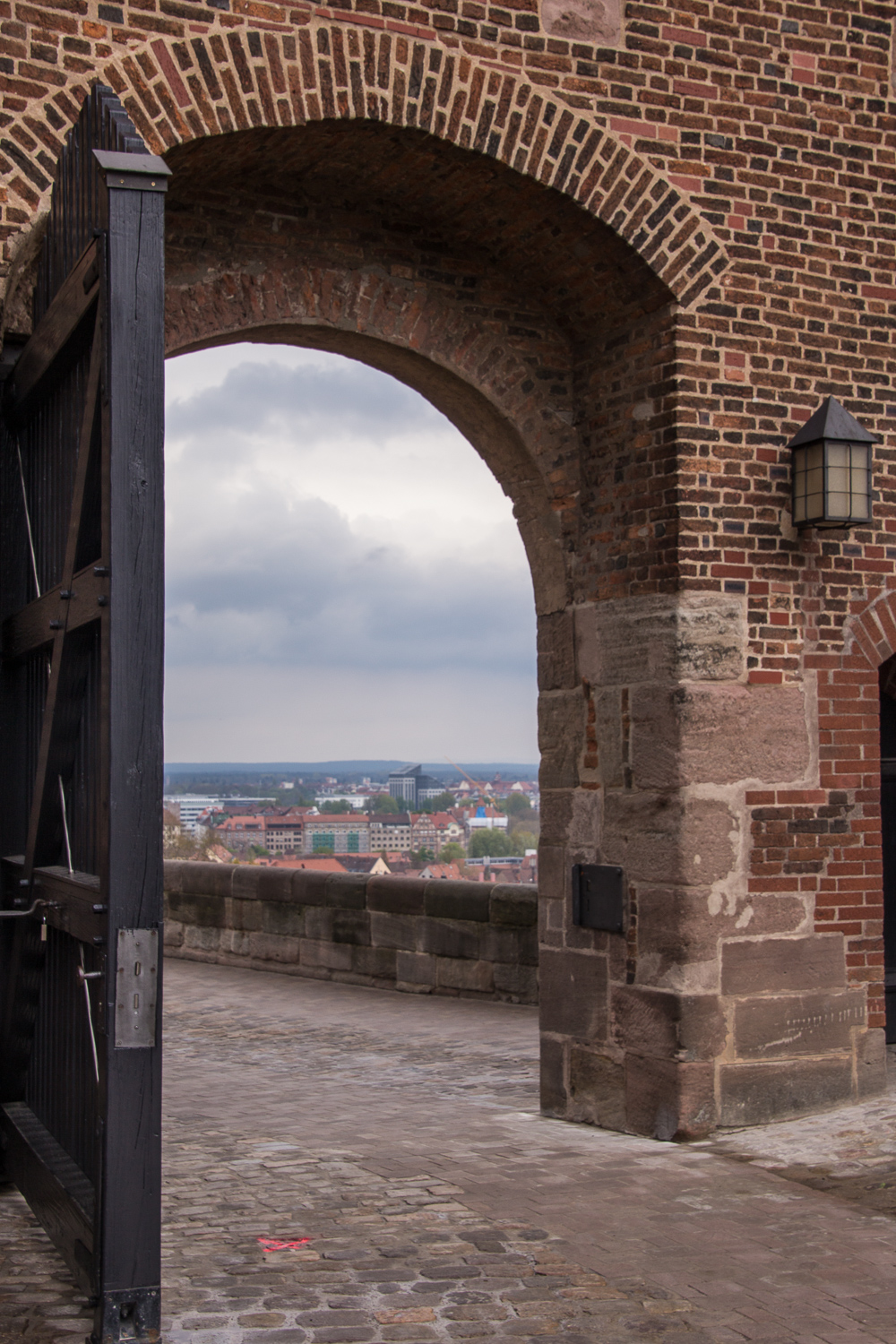 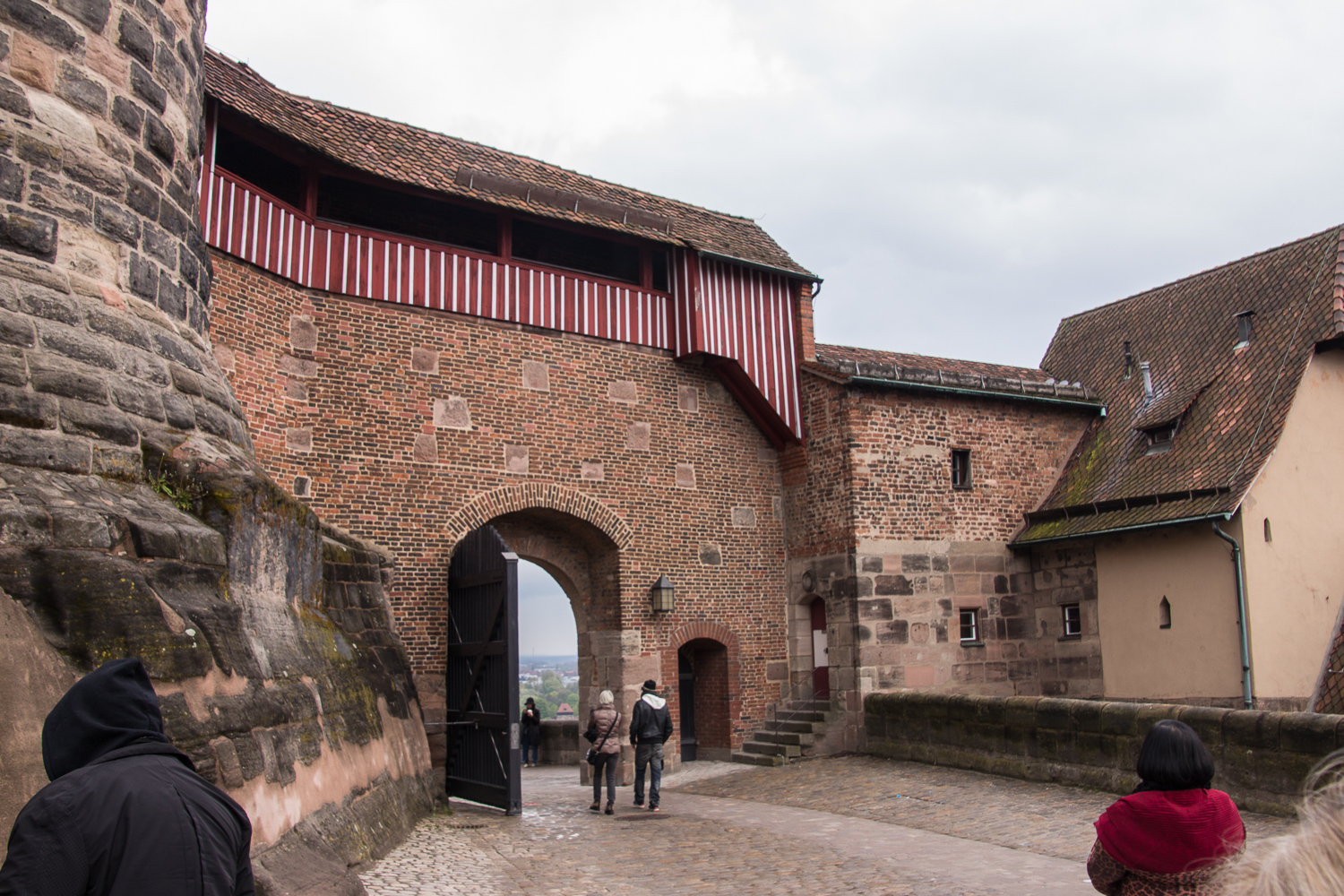 Another view of the courtyard and wall. Note the walkway along the top of the wall – I wish we could have gone up there to try it out. 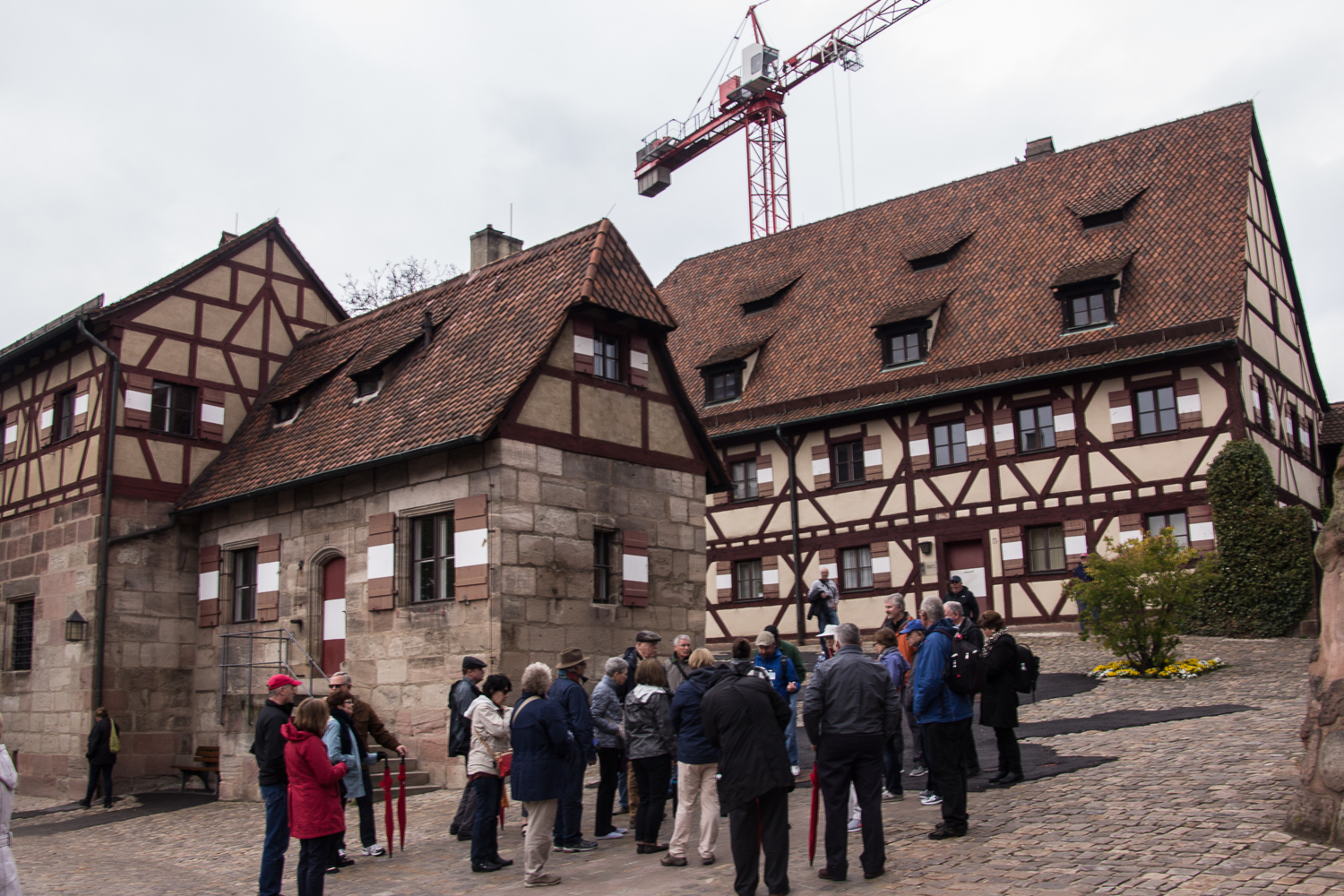 Here’s our tour group standing in the courtyard listening to our guide. The building on the left is a well house. The well was there first, of course, then they built the building around it to keep critters out. The larger building in the back is a post-war reconstruction.

We were then taken up to the castle area. Nuremburg castle dates from medieval times and it is really a fortress with high, thick walls and defensive towers. The view from up there is grand. I have a personal memory of this castle – no, not from medieval times! – from 1968 when I was with a group of high school students who stayed in one of the castle buildings which had been converted into a youth hostel. I mentioned this to our tour guide and he said that the youth hostel has been recently renovated and is now one of the most popular hostels in Germany. 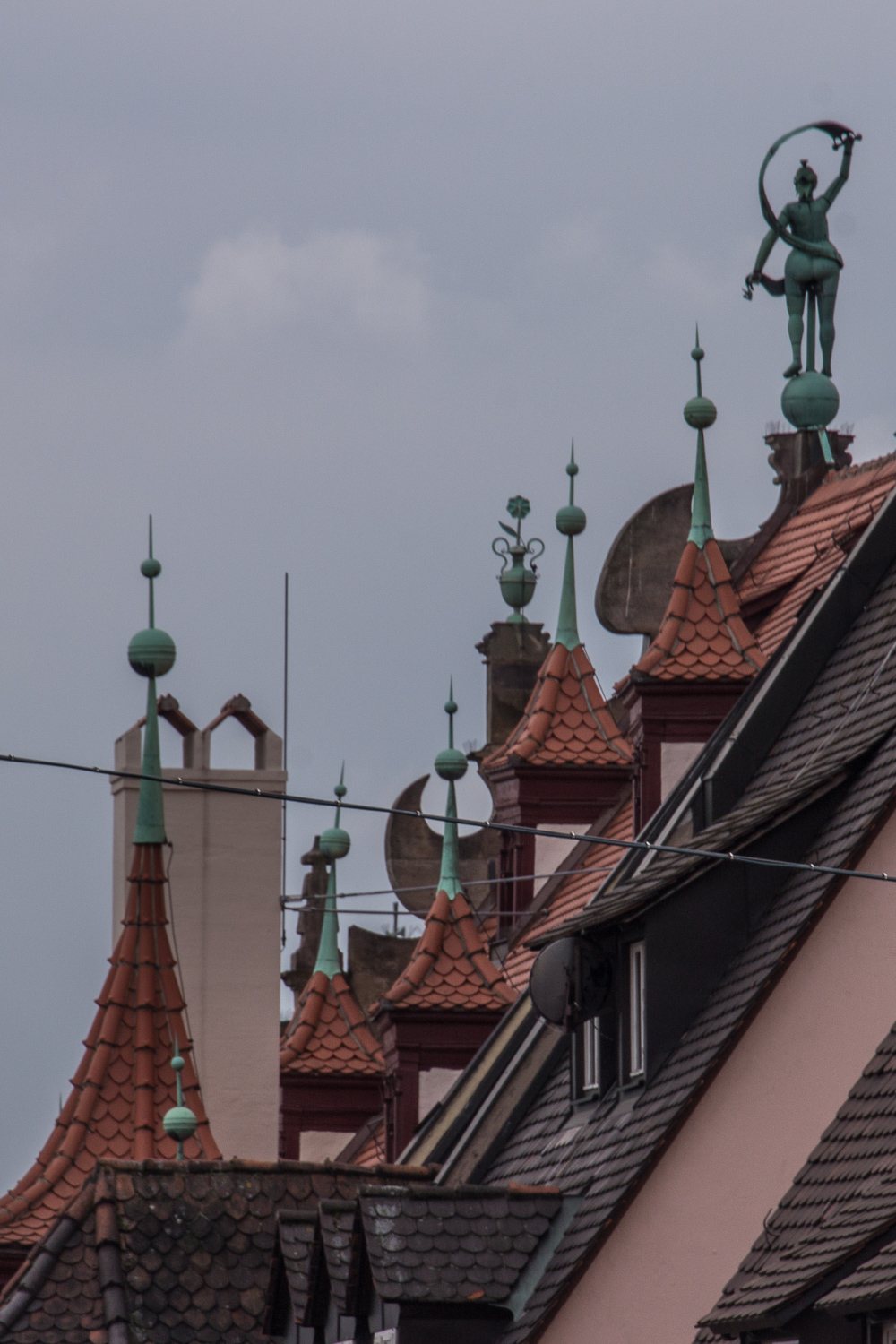 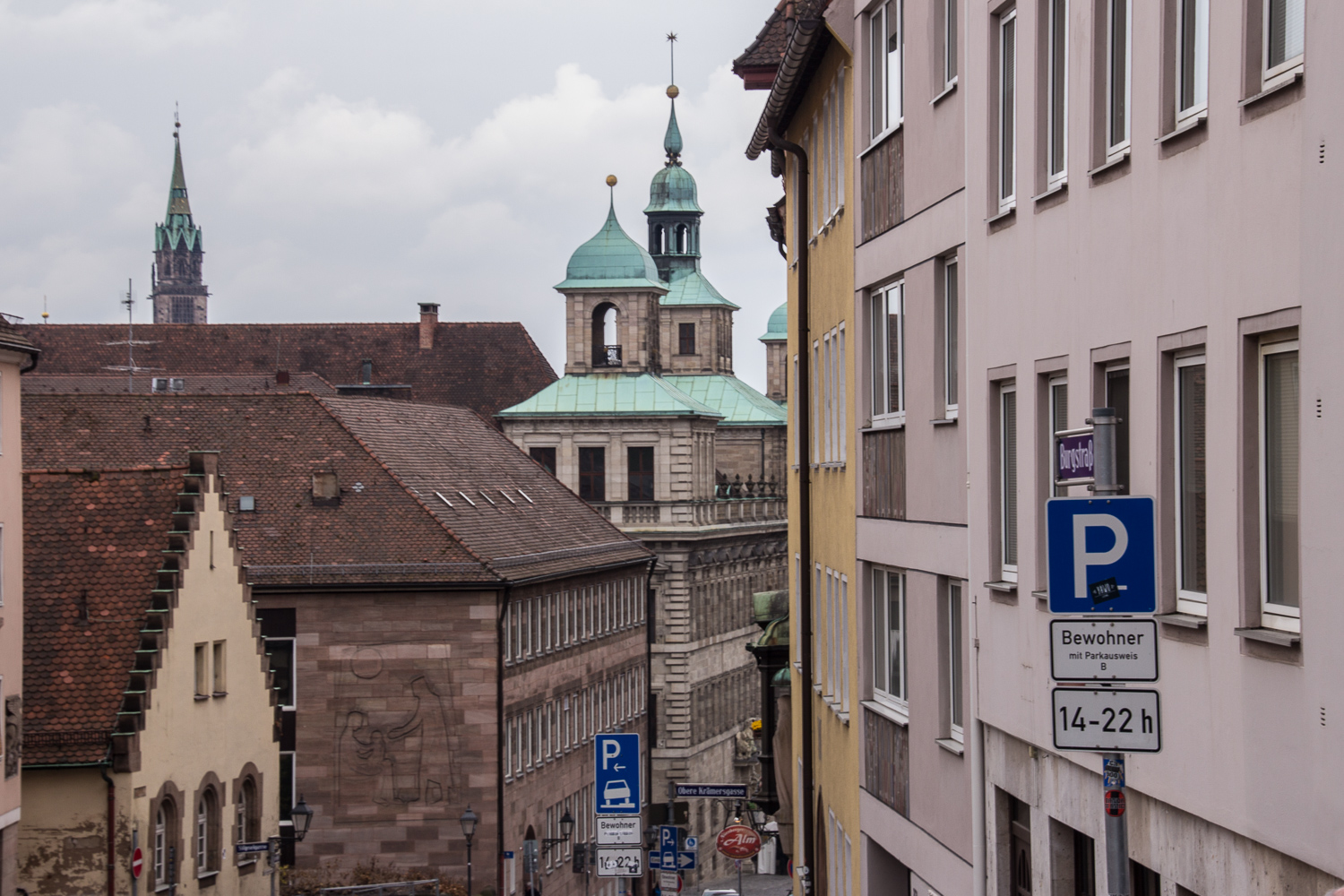 Left: This type of roof decoration is unique to Nuremburg, as far as I know. I’ve never seen it elsewhere.

Center: There’s a lot of variety in the architectural styles in Nuremburg. Note the designs on the walls, and the design of the rooftops.

Right: This beautiful balcony is a small addition to the room it is attached to. We see these all over Europe. They are a sign of wealth. 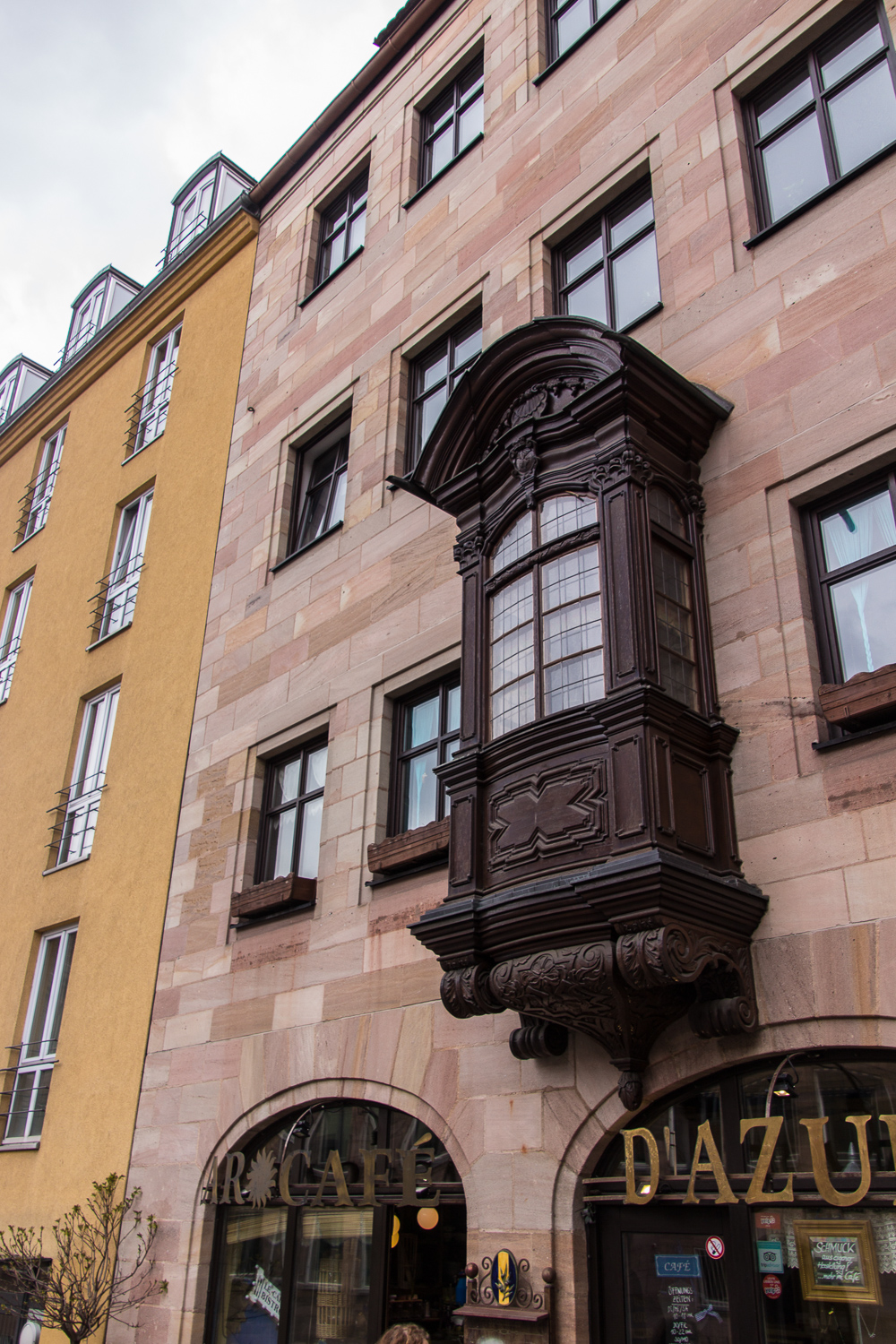 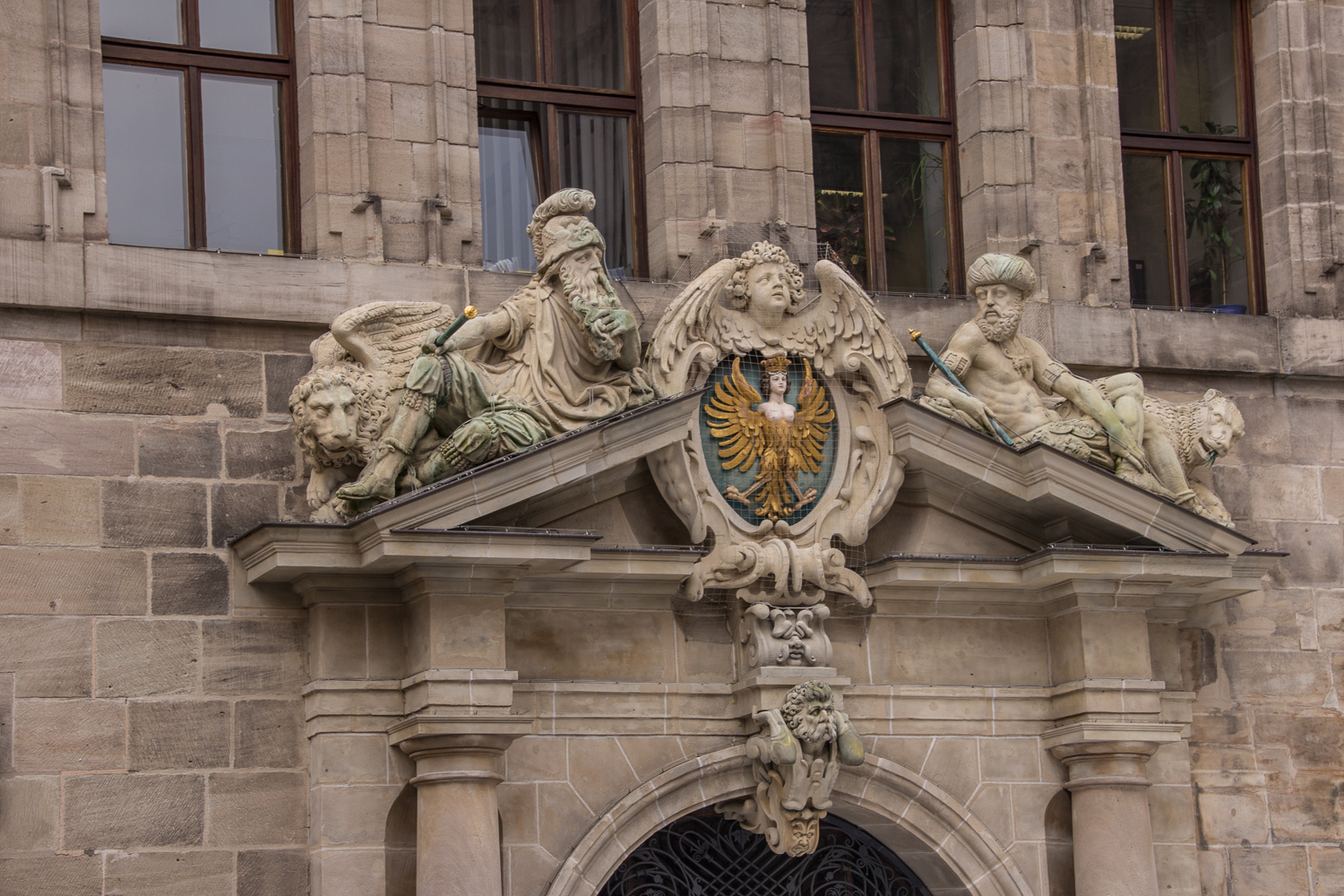 All of this sculpture is used to decorate ONE doorframe on the main street of Nuremburg. I love the casual, relaxed attitude of the two men. How many faces can you count in this sculpture? (I see 9.) 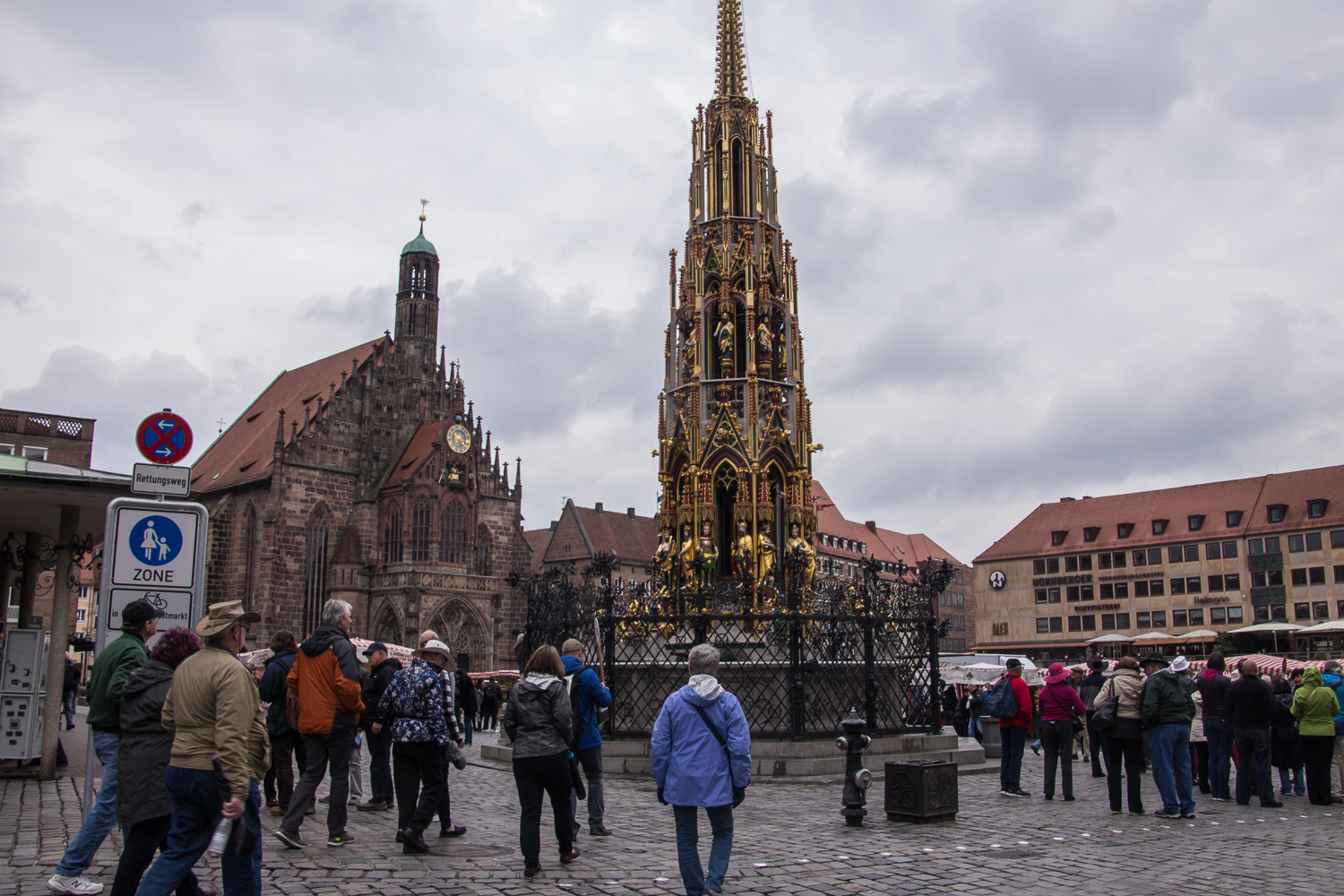 Our group approaches the Schöner Brunnen (Beautiful Fountain) in the market square. To the left is the Frauenkirche (Church of Our Lady), and the market stalls are on the right. 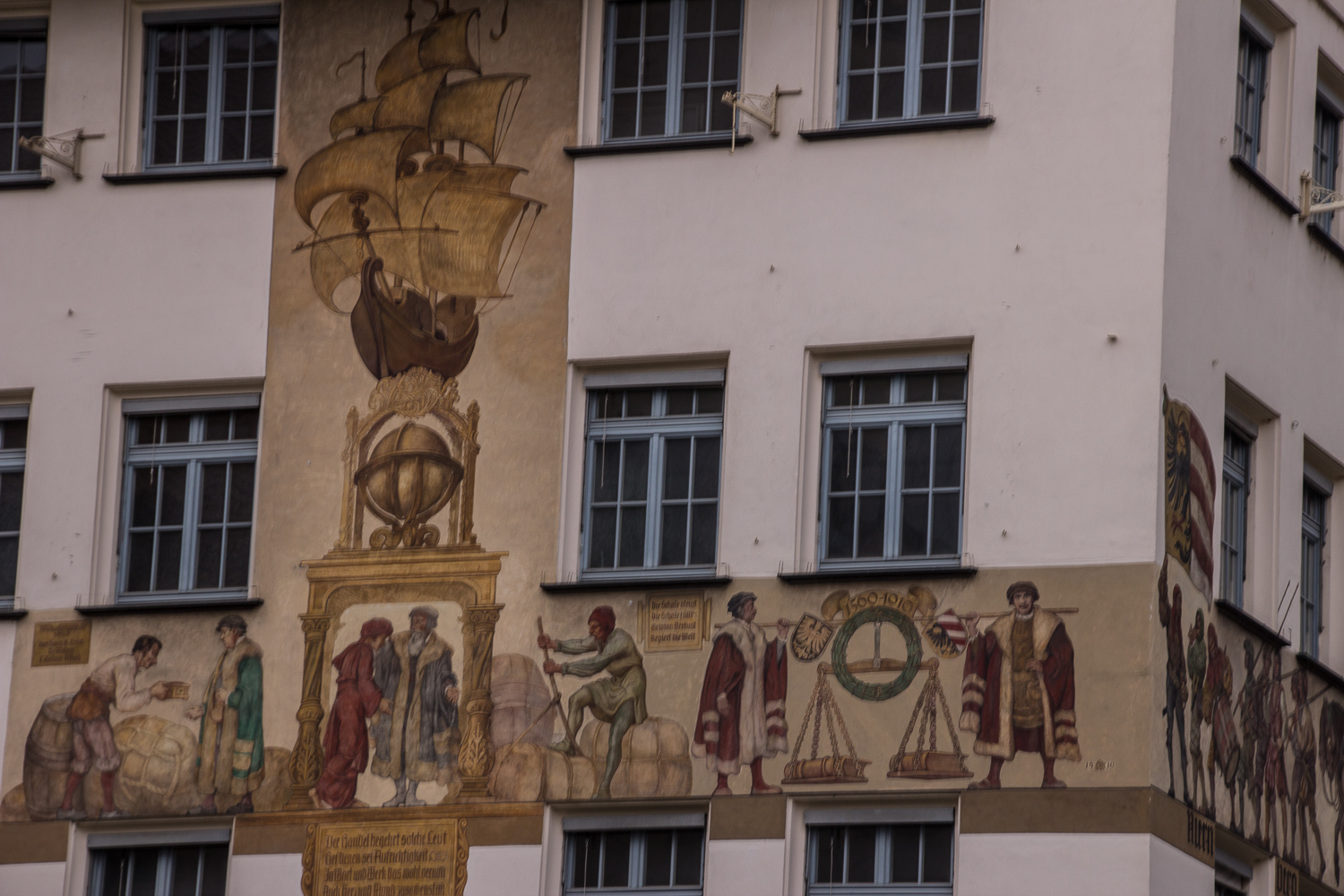 Left: Detail of the Beautiful Fountain, which was built in the late 14th century. There’s a brass ring in the fence around the fountain which visitors can spin for good luck.

Above: The history of Nuremburg – specifically the salt trade – is pictured on the side of this building which faces the market square.

Right: The church has several relief sculptures embedded in its walls. This one depicts Christ and the disciples in the Garden of Gethsemane. 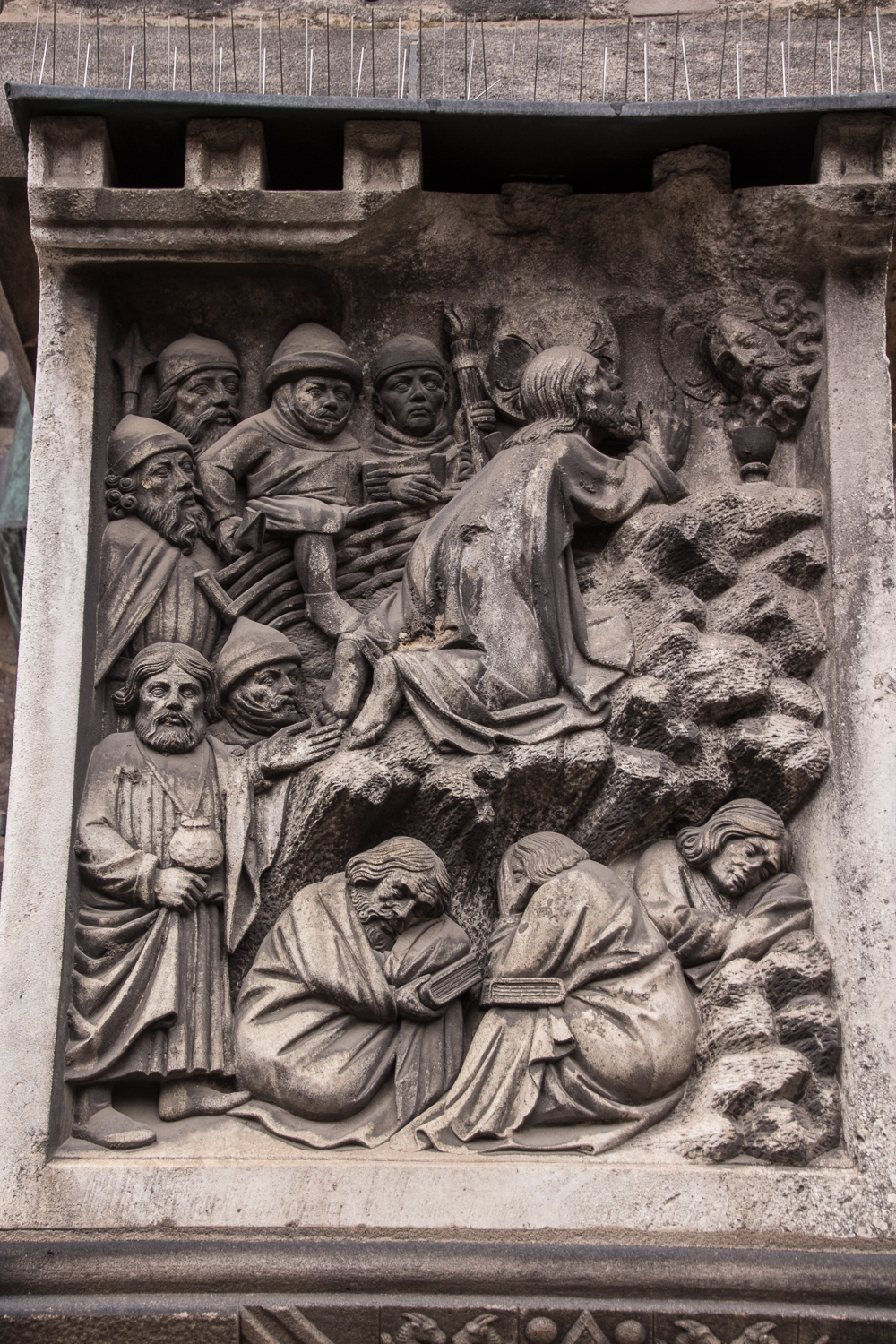 From the castle area we walked down to the city, into the market square. The most famous landmark there is the Schöner Brunnen (“Beautiful Fountain”) which really is attractive. The market square around it is the location of the famous Nuremburg Christmas market, but not in April. Still, there were lots of vendor stalls set up and it was fun looking around. We did that for a while, then went for coffee. Joyce was not successful in getting them to put both espresso AND chocolate into the same drink. Apparently that’s too much for them. But she always tries! 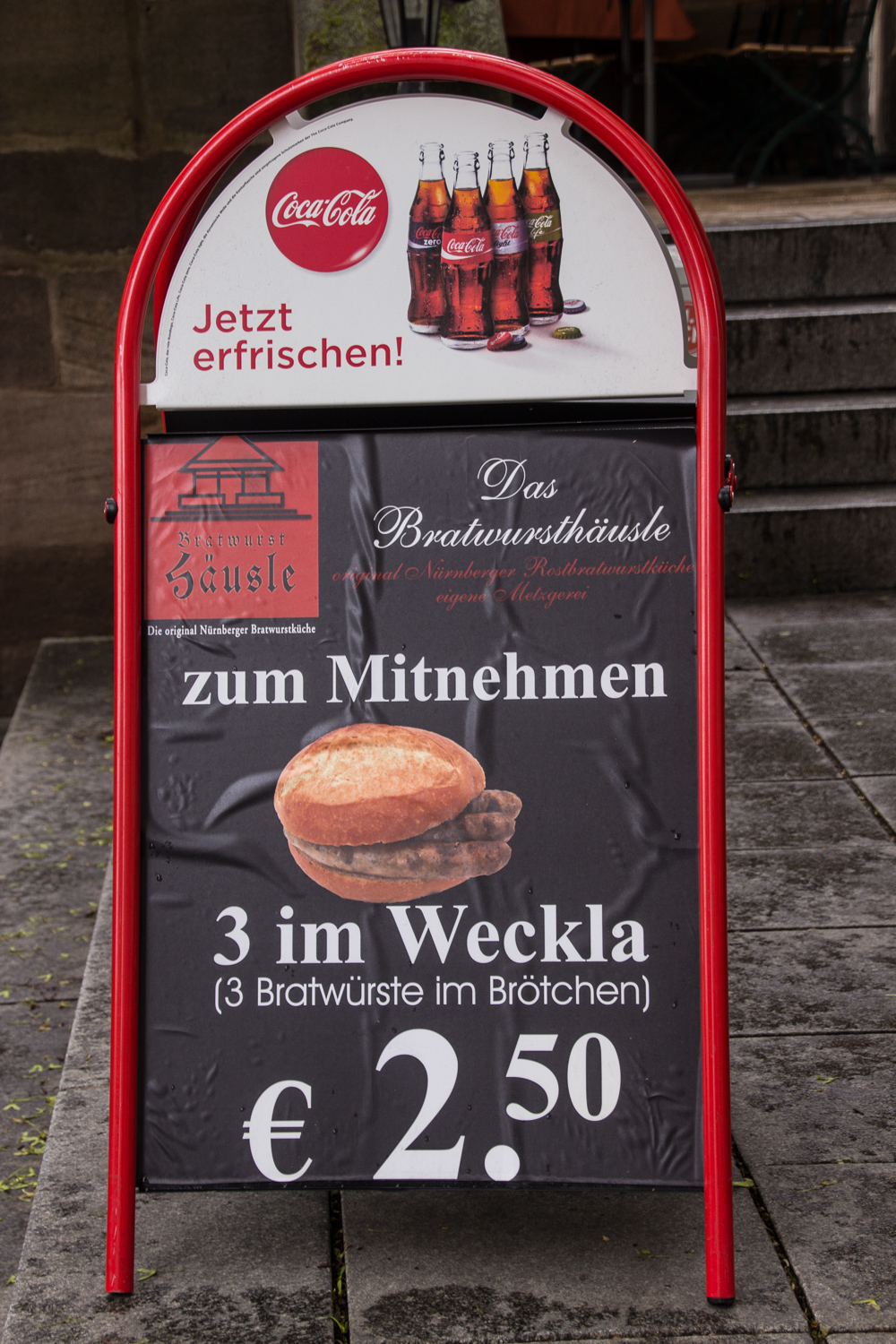 Just one more picture! We didn’t see any fast food franchises in old town Nuremburg (hooray) but this seems to be the local equivalent: Three sausages in a bun. When we were in nearby Regensburg our guide told us that they were famous for putting two sausages in a bun, so apparently Nuremburg is winning the competition.