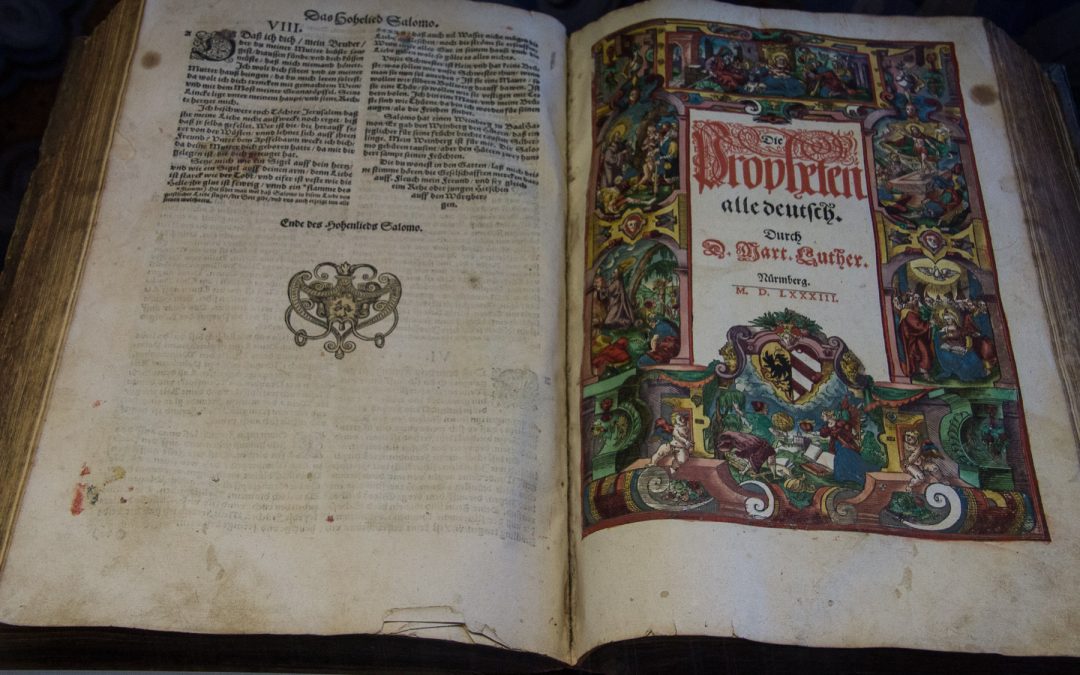 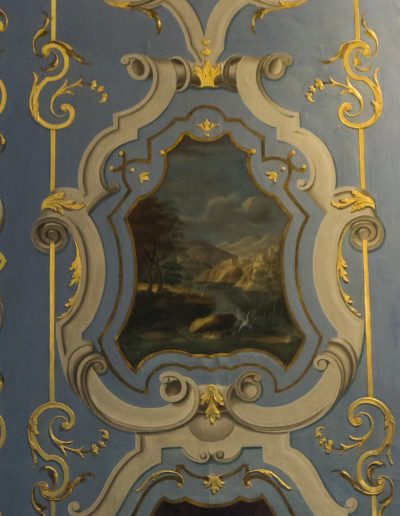 The walls in the reception hall rooms are covered all over with this highly detailed baroque-style decor. 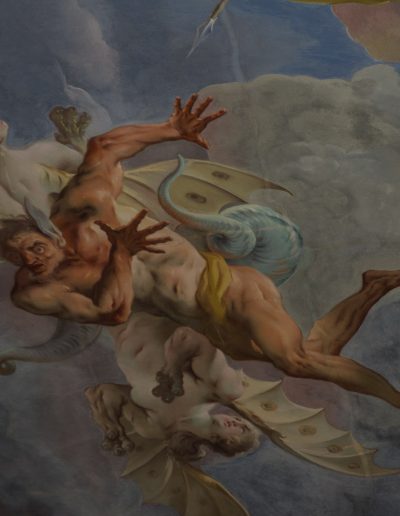 This is a detail from the ceiling painting in the royal reception hall. Looks like the good guys are defeating the bad guys. 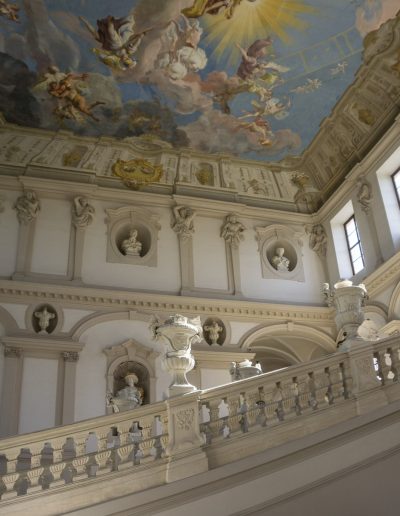 This beautiful reception hall was created in preparation for a royal visit from the empress – which never really happened. 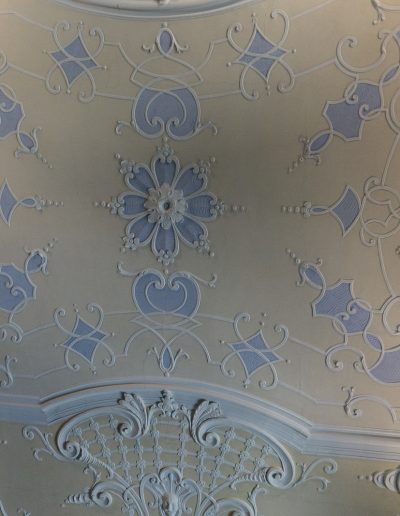 Most of the walls in the upper-story rooms in the reception halls were completely decorated with paintings and stucco work. 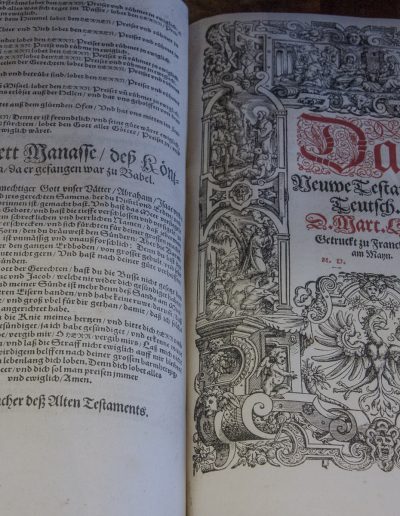 I questioned the presence of a Protestant Bible, written in German, in a museum that is part of a Benedictine monastery. The answer: “its an old book.” 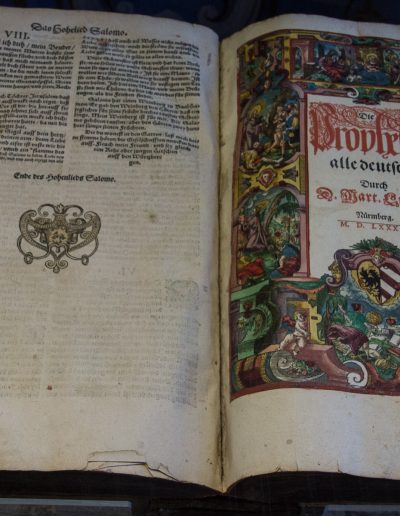 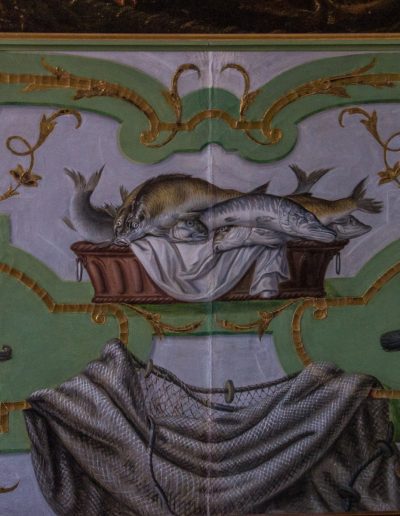 Another form of wall decoration used in small 2nd-floor rooms of the royal reception hall. Many images feature the beautiful Wachau valley and its inhabitants.

Now that our big adventures in Budapest and Vienna are past, we can turn our attention to the ship and to the small towns that we are visiting along the Danube. The first of these is Krems, in the Wachau just up the river from Vienna. There is a small abbey (42 monks) on top of the hill which we visited in the morning.

Apparently the abbey’s income is mainly derived from agriculture, unlike its neighbor Melk which has gone for the tourist trade. The chief agricultural product in the Krems area is the apricot, which they sell in the form of brandy, schnapps, wine, nectar, and marmalade. Karen bought some nectar but we forgot to drink it, and it was taken away from us at the airport because it was a dangerous liquid. So I can’t recommend it.

It seems that the Viking Cruises line prefers touring this abbey over the one at Melk. They say they’re the only cruise line to offer tours here. Melk is too touristy, they say. Hmmm.

It really is a pretty and peaceful place. The guide (a woman who appeared to have some connection to the abbey) kept talking about their financial troubles over the years and what they wanted to do vs. what they could afford. Indeed, the walls had painted outlines of windows instead of actual windows. “We had planned for a new building over there,” she said, pointing to an empty piece of ground. Apparently it’s hard to subsist on apricots alone.

The abbey buildings were far from finished; they’d run out of money to complete their building plans. Some windows were painted as outlines on the buildings, instead of actually being there. One of the clock towers was a real clock; the other was permanently painted to 11:06 (no particular reason for that time, we were told).

A reception hall had been built in anticipation of a visit from the Empress. Its interior was entirely white, with a series of shallow staircases (shallow steps making for a more elegant procession). The ceiling was beautifully painted, baroque-style. A series of rooms on the upper floor were prepared for the Empress and her party to stay in comfort.

All this – and the Empress showed up once, for a couple of hours. It seemed that she had a reservation over at Melk.

The upstairs rooms had been repurposed as a sort of museum. One room was focused on old books – specifically Luther Bibles. I was surprised that a Benedictine abbey would display the works of the Protestant leader. Our guide explained that old books were so valuable that even when the order came to destroy them they only tore off the front covers, which apparently prevented their use. But it enabled their preservation. 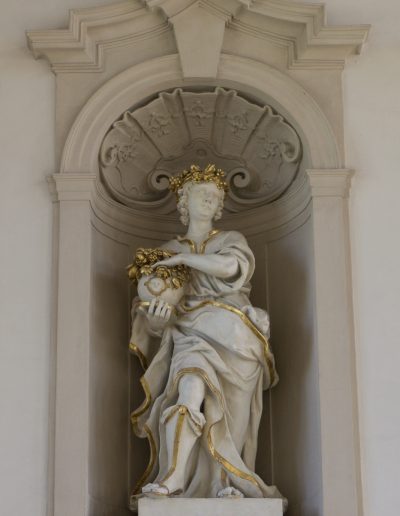 The royal reception hall was not religious in any way. All of the images had to do with royalty and pagan religion. This is the spirit or goddess of spring. There was one for each season! 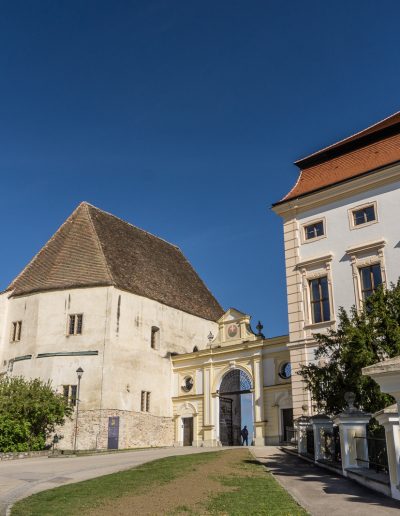 This is the main entrance to the abbey grounds. 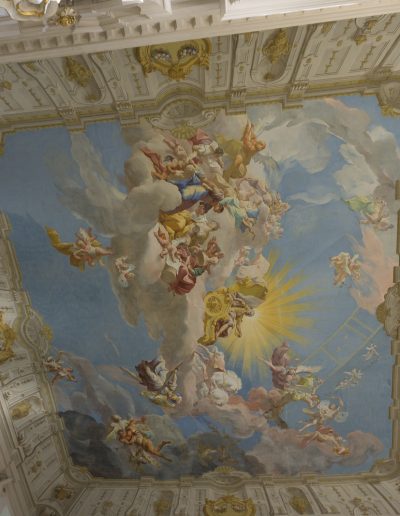 This is the ceiling painting in the royal reception hall. The kingly chariot driver in the center is the current emperor at the time of painting. 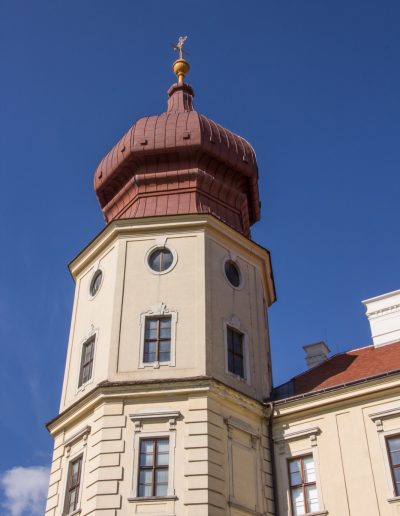 A tower like this is placed at each of the four corners of the abbey grounds. When viewed from the town of Krems, the towers are the most prominent feature of the abbey. 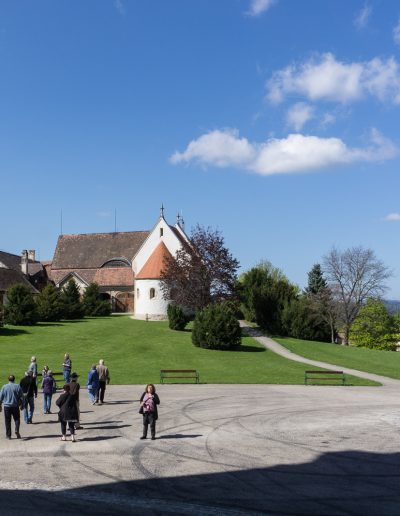 Here is our tour group after exiting the church and coming out into the center of the abbey grounds. 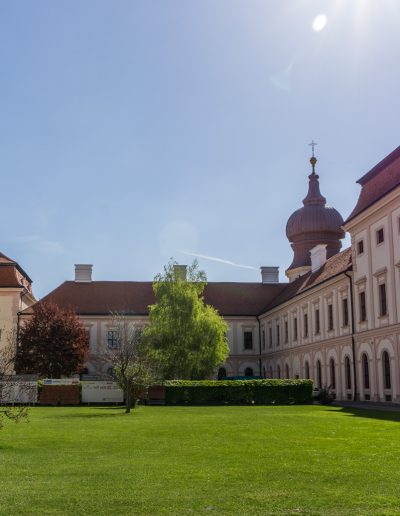 These buildings were off-limits to visitors. The monks live here, and their library is here as well.